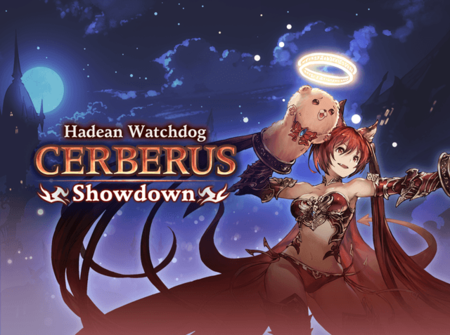 Summer’s the perfect season for delicious hot dogs, so here’s a quick run-down of what to do for Hadean Watchdog Cerberus Showdown, the current Granblue Fantasy event running from 1700 12 July 2017 – 2059 17 July 2017.

The Cerberus Showdown event primarily features loot for Primal Dark, so if Dark and Hades grids aren’t a concern for you – now or ever – then you can give a majority of this event a pass – though there’s still a few useful things in the event store.

As usual, skip on down to Being Efficient if you don’t care for getting into the specifics of the loot, but just want to get at it as quickly and efficiently as possible.

Update: this guide previously erroneously stated that the wvent started at 0500 rather than 1700; thanks for the correction, PetriW on the GBF Subreddit.

Update: this guide previously erroneously stated that Cerberus Orders could drop from Cerberus Maniac; they cannot. Thanks for the correction, CornBreadtm on the GBF Subreddit.

The most important thing to get from the event store are the Half Elixirs – there are 20 in total, at 2 per day, for a trifling amount of treasures.

Beyond that, the store also contains Champion and Supreme Merits as well as a total of 300 CP (in sets of 20×10 CP and 10×10 CP), which can be worth grinding for, if you’re not planning on spending those treasures on Cerberus Orders.

I hope you remembered what I said last time and saved your half-elixirs, because there are no event raids: all the content for this event is solo-only.

Being efficient at the Showdown grind depends on your goals, time, and resources.

If you’re going to try and get 3 Cerberus Order 4LB, then you probably won’t need to spend treasures on Cerberus or Hellward Dagger copies, as you’ll be getting lots of those from flipboxes that weren’t Cerberus Order.

For maximal efficiency on the path to 3 Cerberus Order 4LB, you will:

In the course of doing this you will likely wind up with multiple Hellward Dagger 3LB, Cerberus, and – if RNGesus has forsaken you in particular – an excess of Magic Halos. Since none of this event’s battles are raids, you’ll be spending lots and lots and lots of AP if you’re going hard for Cerberus Orders.

If you’ve instead settled for going for just 1 Cerberus Order 4LB for this event (probably because the grind looks intimidating and possibly lethal and you’d rather settle for 1 Cerberus Order 4LB + 2 Cortana on your Hades grid), and you have not already purchased copies from the store, then you instead do want to do the hardest difficulty of Nightmare fights that you can, to speed up the Magic Halo grind (which is what you will be gated by) – but other than that, the basic grind stays the same: do your daily Maniacs, then grind Extreme fights to proc Nightmare fights (and do the hardest difficulty of Nightmare fight you can clear). If you’ve already emptied the event store and still need more copies… your only recourse is relying on Nightmare flips, so refer to the previous several paragraphs.

Finally, if you don’t want to farm for Cerberus Orders at all then  you can just punch your daily Maniacs and grind Extremes and the easiest difficulty of Nightmare for copies of Hellward Dagger and Cerberus (and for treasures to trade for the store copies if they’re still available for you).